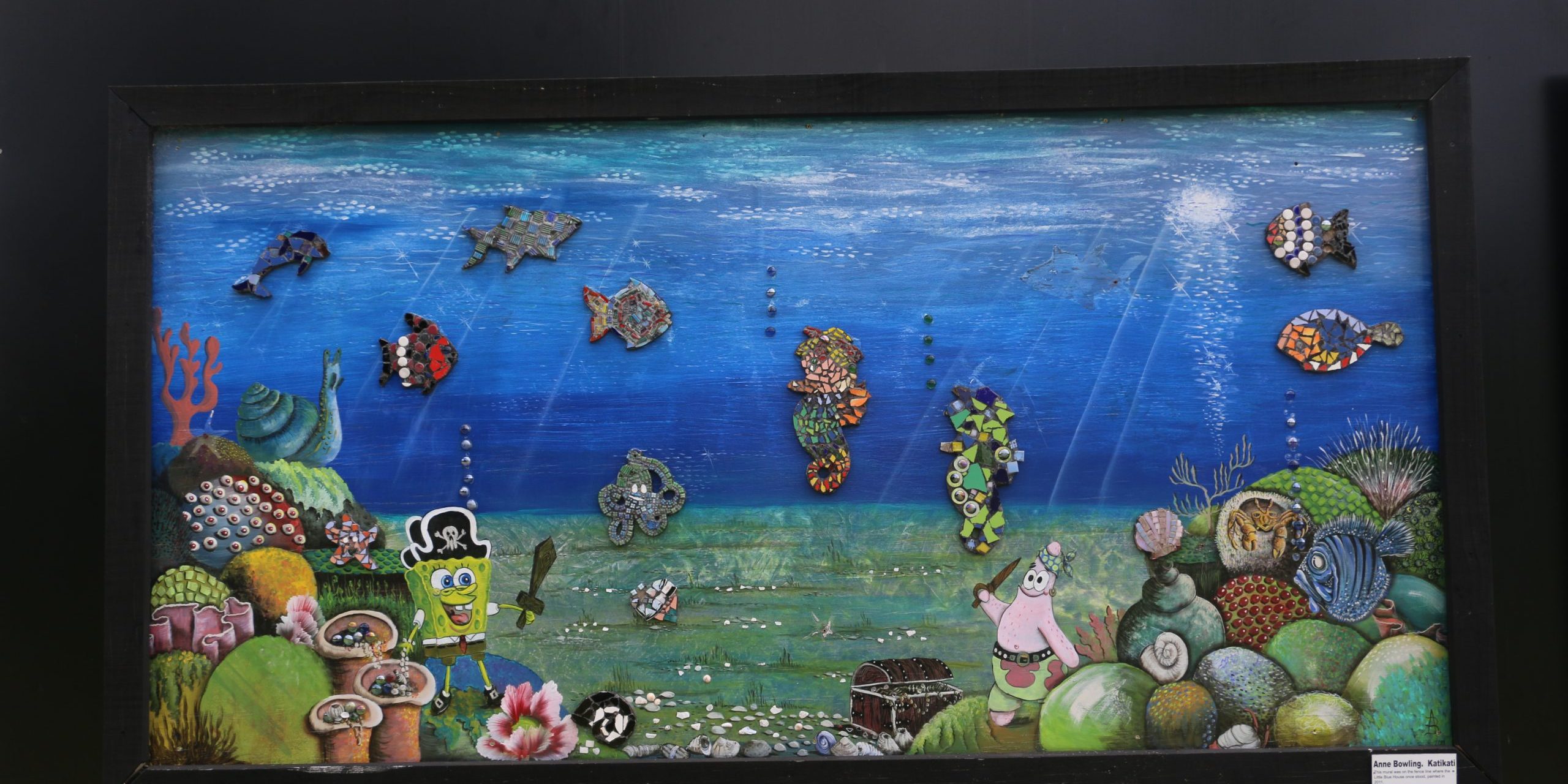 Katikati Open Air Art held their AGM on the 24th May and President Steve Graveson presented his report summing up the past year.

Here is the report.

This president’s report coincides with the last few months of Katikati Open Air Art’s 30th year of operations. A momentous and special event, especially for a group who until recently, was a fully volunteer run organisation, this is a real achievement and something we as a group should be very proud of. It is interesting and exciting that when you stand in our main street, look both ways, you will see the numerous installations and images that Katikati Open Air Art have either created or had a hand in helping develop.

Since our last AGM ten and a half months ago, we have continued to see the ongoing effects and impact the global Covid pandemic is having on the world. We in New Zealand have been very blessed though, the effects on us have been quite minimal. For Katikati Open Air Art in a lot of ways, it has been business as usual. We certainly have noticed the lack of international visitors, but it hasn’t stopped us from continuing to grow and add to the collection and develop our roles and responsibilities. We were fortunate to receive funding help for wages from the Government, and from the Western Bay of Plenty District Council, through a ‘Resilience Grant’, funds that have been used to update all the mural collection signage, to now include a QR Code which will assist for visitor information in the future. We were also successful on a number of other grant applications last year, a big thanks to those funders, to COGS and BayTrust for some operational support and Creative Communities for funds to publish the rugby book and to develop two art classes for children.

At the start of last year it saw the employment of a part-time staff member, a big step for our group. In the last year Katikati Open Air Art has also started creating a full-time base within the Arts Junction complex, with an office and storage rooms. We have also taken over the full-time operations of the Carlton Gallery. We were successful in applying for ‘Operational’ funding from Tect and Grassroots, this will help pay for wages, rental, insurance and other operating needs. A huge thank you to them for that support, it is very much appreciated.

On the project front, we have been a bit quiet, for a variety of reasons, but we have still been busy doing lots of little jobs. The Katikati Rugby club mural is still a work in progress as we are still waiting for Jason Manukau to be able to return to New Zealand to finish it. The club’s 140th celebrations over Queens Birthday weekend in 2020 had to be postponed, aiming to be held in July 2021. As for the rugby book it was completed and launched on time, at the museum exhibition opening ‘Champion in Their Fields’. Despite the events of the year these both went ahead and proved very successful. The exhibition was an example of our collaborative work with the Western Bay Museum again. We installed the John Groves Cut-out mural, thanks to Lions of Katikati, Acumen Construction and the Western Bay Museum. This little project has also started a number of other similar figure cutouts being created, which is something to look forward to.

There are also a number of other smaller projects we are currently working on around the town, and that’s something for next year’s report.

The 2021 New Zealand Mural and Arts Festival is well on track for later this year. Our eighth festival got off to a bit of a slow start, but planning is now full steam ahead. It will be slightly different this time, Katikati Open Air Art is again working alongside Katch Katikati and this year the mural contest will be part of a month long Katikati Festival of Arts, where the theme is ‘Light Up Katikati’ with numerous events and activities scheduled. The New Zealand Mural contest has its own theme, basing itself around a portrait style competition, using the images of local heroes who supported the community during 2020. These portraits will then be assembled together to form one large mural that will remind us of what a supportive community we live in, especially during a time of adversary. The festival has attracted huge community support and will hopefully again showcase the variety of talented artists and art mediums we have in our community.

Now to recognise those who support and work alongside us.

A big thank you to our Patron, Gary Webber and to the Western Bay of Plenty District Council for your ongoing support and our relationship, especially the annual grant we receive that helps towards the huge task of the ongoing maintenance and upkeep of our collection, which is now numbering 86. The maintenance of our collection is ongoing work, it is very important to keep our collection in top shape. During the last year it has been a bit hard to undertake a number of projects that had been planned, due mainly to artist availability being an issue, but we have identified the projects we are want to do and they have been allocated funds to allow them to happen – 1; Major upgrade of ‘Barry’ sculpture with Artist Donald Paterson, 2; Repainting of the ‘Bullock Team 2’ mural with USA based Crystal Barbre, 3; Repaint of ‘Jimmy Culpan’ mural by Shane Walker, 4: The repainting of the Eel by Zeke O’Dey.

A very big thank you to all the volunteers, supporters, and the businesses that support us, like Acumen Construction, Resene, Lions of Katikati. A big thanks to all the organisations who annually support us with funding like Tect, Bay Trust, COGS, Creative Communities and many others. All these organisations help on projects, funding, sponsorships and materials throughout the year and without that support a lot of what we do wouldn’t be possible. To the Katikati Scouts and Guides, a big thank you for undertaking the annual clean up again each year, an event that helps the children gain their Community Service badge. A special thank you to Roger, who faithfully looks after ‘Barry’ and reminds us of when he needs a bit of extra care.

To Jacqui, and her team at Katch Katikati, and the volunteers who man the desk and help out, thank you again for your hard work, it has been great working together over the last year working towards the continued successful operations of The Arts Junction.

I would like to thank the Katikati Community Board for their support, especially John, who has embraced his role as our link to the board.

A big thank you to Karen and Giles & Associates for their support and financial expertise, it is huge task that we are very grateful for.

To my fellow committee members Sheryl, Anne, Peter and Carolyn a big thank you for all the many hours of time you give to Katikati Open Air Art each week. Your many volunteer hours you give each week is worth its weight in gold and I do very much appreciate it. I look forward to working with you on the many new projects and jobs we have planned for the future. A big thank you also to Fiona who works for us part time, especially curating the Carlton Gallery.

Even though these times we live in have become very different from the past, we can still celebrate 30 years of hard work. We can give ourselves a pat on the back and enjoy the many great and rewarding projects, events and opportunities we have delivered to our community. Our challenge is to ensure that what has been achieved over the last thirty years continues for the next thirty.

It will be exciting to see what the future holds.

Re-Envisioned – When recycling, the imagination has no limits
June 8, 2022